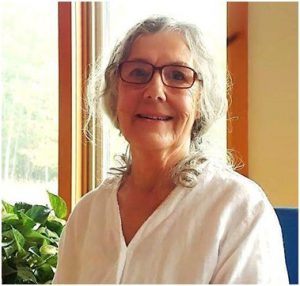 Roberta Jean Hodges, 80, died peacefully July 27, 2017 surrounded by family and friends after a short stay at the hospital in Marshfield, WI. Roberta was born January 26, 1937 to Lyle Walter Hodges and Florence Evelyn Chavey in Owosso, MI. She married Keith “Reggie” Hamilton in 1953 and had two children, Richard Keith and Karen Sue. In 1957 she married Harlan Leigh Seelhoff, also of Owosso, who adopted Roberta’s first two children, and together they had two more children, Timothy Leigh and Marcia Ann.

A lifelong free spirit, Roberta engaged in many of the social movements of the 60s and 70s. Together with her many friends and fellows at Walker United Methodist Church, she promoted education reform, equal and civil rights, and community support for south Minneapolis neighbors in need. Later in life she took a more personal, intimate approach to teaching and healing, focusing more on the movement of the Spirit in her own life, and others near and dear to her. Since she felt most at home in the northern forests, Roberta finally realized a lifelong dream to live amongst the trees, trilliums and wild creatures of the woodlands, in a rustic cabin she designed herself. The natural world was a lifelong love affair for her, a source of endless delight and fascination, the wilder the better. Besides her cabin in the woods at the Christine Center, Roberta treasured most her family, friends, and faith communities. Her attentive, appreciative and joyfully enthusiastic presence, together with her unshakably positive faith-grace-and-wonder-filled attitude towards life, encouraged and enriched all who knew her.

Two memorial services will be held, one 3:30 pm Sunday, August 20 at the Christine Center in Willard, WI and the other at 3:00 pm on Saturday, September 30 at Walker Community United Methodist Church in South Minneapolis, MN. Instead of flowers, Roberta’s family requests that donations be made to either the Christine Center or Walker Community United Methodist Church