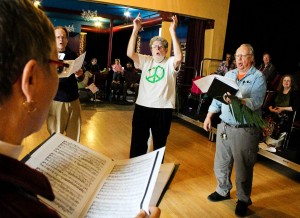 Walker Singers performing during celebrations at Patrick’s Cabaret, our temporary home while the present church building was being planned and built.

Here are some videos of the Walker Singers on You Tube.

Check out the Walker Singers on YouTube from the performance at Forest Hills UMC, May 6, 2013.

Check out the Walker Singers as choir of angels in the Heart of the Beast production of La Natividad, December 2006. Walker Singers was organized in January of 1984, after the success of the Holiday Revel in December, 1983. Many of the original members had performed in the Revel both as soloists and in groups. Part of the inspiration was hearing an a capella group called The Occasional Chorale which had been organized for the Revel by Jim McCreary and Mike Byrd. Jim was the only Walker Church person in that group. Folks from Walker heard them sing motets, madrigals, and shape-note songs and, mainly through the organizational skill of Bryan and Diane Peterson, they decided to form a singing group based at Walker.

There was no official leader at the start, but Bryan was a powerful influence on choice of repertoire, while Jim often led the rehearsals. Sometimes other people would bring a favorite song, and work with the group to learn the music. A primary source at the beginning was a collection of early American music assembled by The Word of Mouth Chorus which we have always called The Orange Book because of the color of the cover. We also learned some spirituals, hymns, motets, and other anthems, and began performing occasionally at the Sunday Celebrations.

During the early years, Walker and the other three churches of the Southside United Methodist Coalition (SSUMC) would have a joint concert every year. In addition, the Singers went to the SSUMC churches, Simpson, Joyce and Wesley and to other churches in the greater metropolitan area to help spread the work about the SSUMC. When Jim McCreary became more involved in the activites of the SSUMC council, he would take the Singers to Methodist churches all around Minnesota to show the members of the Minnesota Conference that there was still life in the inner city of Minneapolis.

Walker Singers have been almost exclusively a capella in live performance. However, when making a CD in 2003, we felt that we needed some instrumental additions to add variety to the disc. With that in mind, Jim Kellerman, the producer of the CD, located some instrumentalists, arranged some music, and added accompaniment to a few of our old standards. In addition, Seth Garwood wrote instrumental parts for his own “Psalm 130” and Greg Meredyk created a piano part for “This is My Song.” We continue to enjoy the CD and it is still available for purchase.

We continue to perform frequently at the Sunday Celebrations, and occasionally travel to other churches to join thier morning worship or to be a part of multi-church events. We remain almost completly a capella but have a willingness to try new things. Two composers who heard the CD have expressed interest in writing new music for the Singers. Jim McCreary is always trying to write something for them. Others are welcome to try as well.

The group is all volunteer. People are welcome to sing when the can and take off when they must. The main requirement to sing with us is to feel good about singing with us and to know the song we are singing that day.